Essential tremor (ET), also called familial tremor, is a frequent movement disorder characterized by tremor during action (posture and movement). An anomaly in the output from cerebellum to thalamus causes an overactivity of the motor thalamus and cortex leading to tremor.

Our approach centers on an interruption of this abnormally functioning pathway without touching the thalamus. This allows the coupling of efficiency and sparing of brain functions, and thus if necessary a tremor relief on both sides.

Where to go to provide an efficient and sparing effect against essential tremor relates to years of work, in our case more than 20 years, of study of the tremor mechanism and its most adequate control thanks to consequent selection of brain targets. The good news is: we can provide tremor relief without reducing motor, sensory and cognitive functions. We can apply this treatment on both sides of the brain if necessary.

The long term efficiency of the treatment stands at 80 – 90% mean tremor relief. There is a low risk profile, mainly comprising a bleeding risk in the target, which can be estimated at less than 1%. The risk of collateral damage to structures around the target is significantly reduced by the real-time monitoring of the thermal work, the absence of mechanical brain shift and a targeting accuracy of half a millimeter.

Long term negative effects of the ultrasound lesioning process can be excluded thanks to the fact that it is a thermocoagulation, the long term innocuity of which has been demonstrated by more than 60 years of functional neurosurgical activity using radiofrequency thermocoagulation. Long term results of the focused ultrasound treatments are not yet available. However, as the targets we use are exactly the same as the ones we have developed and used over more than 20 years using the electrode penetration technique with radiofrequency , the same long term results can be expected for all our ultrasound treatments, a fact already confirmed by our one-year results with focused ultrasound.

Recent Articles On the Topic 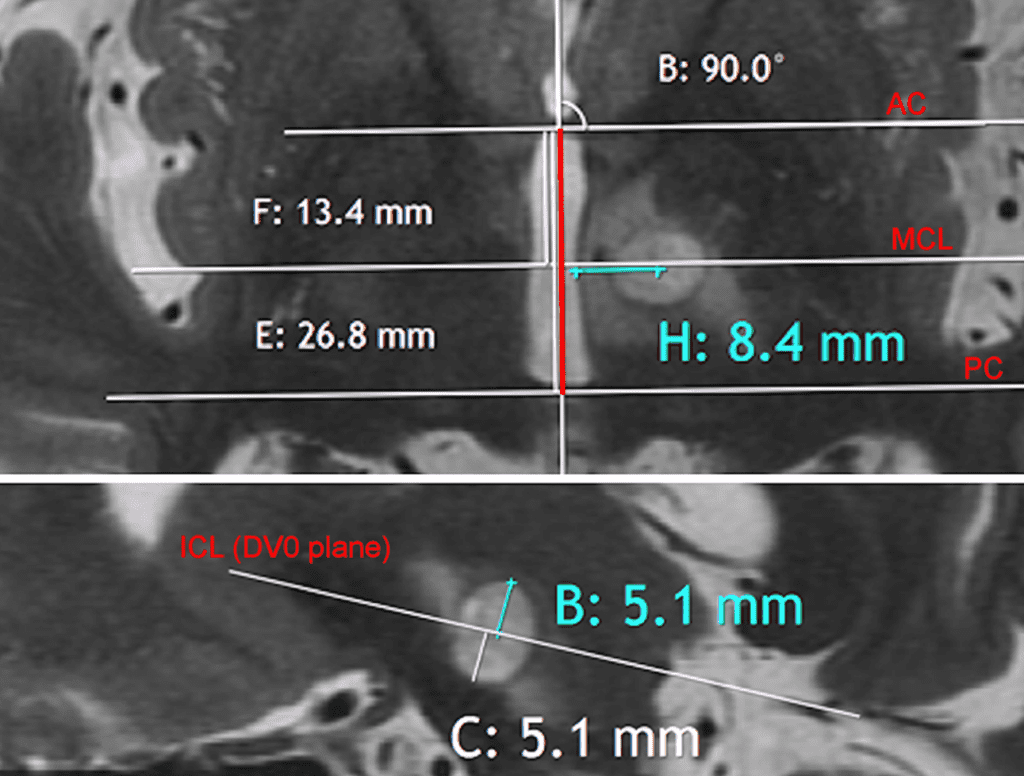 Since the first clinical application of the incisionless magnetic resonance–guided focused ultrasound (MRgFUS) technology only small series of patients have been reported, and thus only extrapolations of the procedure-related risks could be offered. In this study, the authors analyze side-effects and targeting accuracy in 180 consecutive treatments with MRgFUS for chronic therapy-resistant idiopathic Parkinson’s disease (PD), essential tremor (ET), cerebellar tremor (CT), and neuropathic pain (NP), all performed in their dedicated center.
read more

I am a 68-year-old man. As a child I had a mild tremor, which did not bother me very much. I learned to adapt my handwriting and became good at art and later became an architect. I began my architectural career with a world renown practice and later started my own award winning practice which I ran until October 2014 when I gave it up mainly because I could not cope with the disability of essential tremor.

My difficulty with essential tremor really began about 12 years go. My tremor began to worsen without reason. The tremor was worse on my right hand, my dominant side. I noted during times of stress the tremor would worsen. For example social occasions, writing cheques in banks, meetings, presentations etc. I began to avoid stressful situations and sought help from Consultant Neurologists. My tremor was diagnosed as hereditary essential tremor. My late mother had disabling tremor.

During 2008 I began various courses of drug therapies, first Gabpentin followed by Propranolol, Primidone, Topiramate and Mirtazapine for restless leg. The anti-tremor drugs tended to initially reduce the amplitude of the tremor but tended to leave me lethargic. After a period I tended to become resistant to each of the drugs and the tremor increased. When the tremor became disabling. I could not write, I could not pick up food with a fork except by stabbing it or using a spoon with two hands. I drank holding a cup with two hands and invented strategies for coping with day to day tasks such as leaning forearms on the table to assist with steading my hands. At times I found it difficult to control a computer mouse, repeatedly clicking unintentionally or unable to move the arrow where I wanted it to go. Each day was different, some days so bad I felt helpless.

I began to seriously consider the alternatives and discussed this with the Consultant Neurologist treating me at the time. Dr. Bain. The option to drugs available in this country is deep brain stimulation. The National Institute for Health and Clinical Excellence gives advice on safety using deep brain stimulation. The report notes complications could result in further surgery, infections, oedema, hardware failure, haemorrhage, dysarthia, speech disturbance, cerebal oedema and death. Other complications might include stroke, speech impairment, cognitive impairment, depression, suicide, and risk of injury during subsequent magnetic resonance imaging. It is for these reasons that I felt a great reluctance to undergo treatment using conventional deep brain stimulation. The alternative to this which Dr Bain introduced me to is MR guided focussed ultrasound treatment which is available commercially in Switzerland under Professor Dr. Daniel Jeanmonod at the Center for Ultrasound Functional Neurosurgery, Solothurn.

A local anaesthesia is applied to the head to allow the fixation of a metal ring. The ultrasound helmet is positioned around my head with a silicone membrane closing the space between my head and the helmet to allow cooled water to circulate. The head is then brought in position in the MR bore so that more that 1000 ultrasound waves are focused for the procedure. The target in the brain is first exposed to low temperatures to determine the precise centering and then progressively increased to the final temperature to perform a left cerebello-thalamic tractotomy (thalamotomy or burn within the thalamus) and a right-sided centrum medianum thalamotomy. I was awake during the procedure, which lasted 3-4 hours with minor discomfort from the heat from the procedure. I stayed overnight in the clinic under observation, but apart from that felt no pain or discomfort.

Immediately following treatment, the tremor in my right arm and hand was completely cured and remains so. I am now able to write again in my original (pre-tremor) style of handwriting and to draw. I still have tremor in my left hand and continue to take anti-tremor drug therapy. A slight instability in my right leg during walking and a feeling of heaviness in both legs that were present after surgery has since disappeared.

Overall I am very happy with my postoperative experience, Apart from the above I felt well and able to visit the local museums and explore the town of Solothurn.

MR-guided Functional Ultrasound Neurosurgery has frankly given me back my life; My only regret is that I did not have the treatment sooner.
Dr Peter Bain MBBS MA(Oxon) MD FRCP
Reader & Honorary Consultant in Clinical Neurology

I am a 64 year old right handed microsurgeon practicing in the United States.  I can recall that beginning at about age 50 I started to note a slight tremor in my right hand.  While I was able to ignore this for several years, at about age 55 I first saw a neurologist who diagnosed me with essential tremor (ET) and  informed me that it would worsen with time.  Over the years I was placed on several different medications with minimal if any benefits and my tremor did gradually worsen.  I was still able to perform many of the procedures for which I was trained but gradually began to refer to supportive colleagues some of the most challenging procedures.

Approximately 4 years ago during a very stressful period, whereby I experienced severe insomnia for 6 weeks, my tremor took a decided turn for the worse and I stopped performing all but the most rudimentary of microsurgical procedures.  I sought further opinions regarding other medical interventions and a brainstem stimulator was proposed but it was determined that I was not a candidate because my tremor was not severe enough to warrant  the risk and side effects of the procedure.  At the time, through my research,  I became aware of MRI guided focused ultrasound (MRgFUS).

I began to investigate the procedure of MRgUs and found that this exciting therapy had only recently been approved by the FDA for ET.  Most of the experience with MRgFUS for movement disorders at the time was in patients with severe Parkinson’s disease.  My research indicated that the most remarkable results were being obtained by Professor Dr. Daniel Jeanmonod and his team in a tiny village in Switzerland.  I read the available medical literature on MRgFUS and felt certain that the procedure of cerebello-thalamic  tractotomy (CTT) for ET as pioneered by Dr. Jeanmonod of Sonimodul gave the best results with the least risk of side effects.  The procedure of CTT is akin to pruning  a twig whereas thalamotomy as more widely practiced if like cutting the tree trunk.  Before long I just had a calm knowingness  that this was the treatment for me.  Strangely, there was no doubt in my mind.

I emailed the Clinic and Dr. Jeanmonod answered my email himself, proposing a scheduled phone consultation.  After the phone consultation, he agreed to evaluate my condition at his Clinic in Solothurn, Switzerland.  Fortunately my wife was very supportive of this treatment especially as it was not nearly as risky as a brainstem stimulator.  We made the journey to Solothurn whereby Dr. Jeanmonod, his partner Dr. Gallay  and their team performed an in depth 2 day evaluation of my condition and identified that stress was indeed a major precipitating factor in the tremor.   I was relieved, delighted and grateful that they accepted me as a patient for the CTT.  This was especially so since while my tremor was devastating for my surgical career, it was not typically severe enough to warrant  a major procedural intervention.   Sonimodul’s approach of treating the progressive disease early in its course comported well with the universal medical principle of early intervention.

Almost 1 year ago at age 63 I underwent the CTT via MRgFUS and had no side effects and the procedure was a huge success.  It took some time for my confidence to return but I am back to performing  85 % of the types of microsurgery operations that I was trained to perform.   Partly as a result of my age and the fact that I now realize that stress was and is a major factor in my tremor, I am happy to refer some of the more difficult procedures to my supportive younger partners.  I am thrilled to be still in the game!

The whole experience has been a spiritual journey.  I am so grateful for Professor Dr. Daniel Jeanmonod and his team for accepting me as a patient.  I am certain that I would not be accepted for this treatment at any of the US clinics since they perform a less effective procedure with higher side effects in which they cannot treat “milder” cases such as mine.  Not only can I perform my job better, my handwriting is much better (even though I used to get a grade of C- in handwriting in school) and my activities of daily living and confidence have been restored.  My advice for anyone afflicted by ET or any movement disorder would be to investigate the MRgFUS procedure  and contact Sonimodul earlier, before losing confidence in your abilities to function.  Again, I am eternally grateful to Dr. Jeanmonod, and his team at Sonimodul for restoring my ability to function!